I’ve been weaving since the Fall of 2013. As with most weavers, the looms started to fill the place pretty quickly. This craft does not have a small footprint, and the tools of the trade can be fairly unwieldy.

I remember buying my first loom. I got it online, used, and I knew absolutely nothing about weaving or looms except that I really wanted to do it. The previous loom owner actually delivered it to my house and reassembled it for me, in my front sunroom (thank you, patient and harried loom man, for doing that!). For a month or two before I took some lessons with a lovely teacher, I would just go in there and look at it, and take in the loom-flavoured air – a mix of wood, cloth, dust, and promise.

I moved my desk into another room, and figured that I still had lots of space. Over the years, that room has been completely transformed. I took out the couch, the chair, the books. In went another loom, built-in shelves for fibre and tools, benches and boxes for fibre that wouldn’t fit on the shelves. It’s a beautiful room – about 11’x13, with two walls of windows. It also has three doors, wonky heat, and is a sun trap in the warmer months. 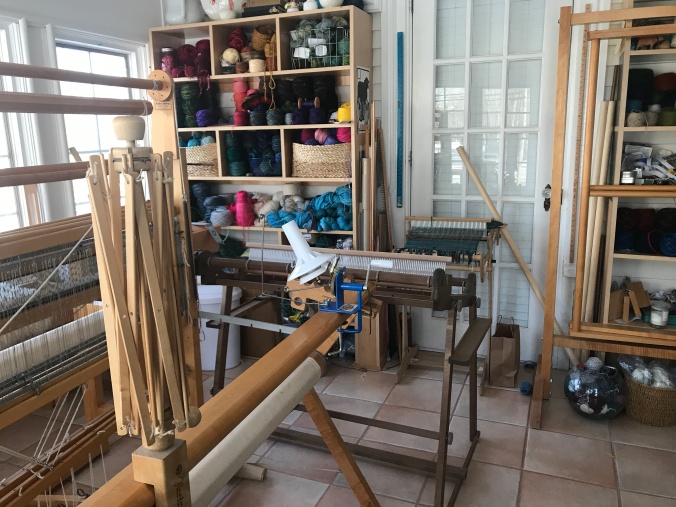 I have to move a loom to get to my fibre, move it back to get to the other loom. My warping reel is folded and in front of a shelf, and I have to move it to access my sewing machine. Then I have to take the machine out to the dining room to actually use it. It’s a drag, and it makes me a less efficient weaver.

So yeah, it’s hard to work in there. I know it’s already a massively privileged space, but I am lucky enough to be able to look for solutions to make it better. I have for most of my life,  fit whatever I did into the spaces I had. It wasn’t always a good fit, and there’s been a lot of making do over the years – a Harry Potter office-under-the-stairs, looms spread around 3 rooms, home offices with kids nearby, etc. A life lived with buckshee solutions is not a solution forever.

So that’s the problem.

The solution? Build a studio in the back garden. Have you ever visualized something you wanted, and then made it happen? A big ask like this seemed ridiculous, but I thought about it for years, made a Pinterest board , and dreamed. Then one day it occurred to us that we could build one and oddly, after that it was simple(ish). I think that making an imaginary future-studio a part of my headspace finally opened up the opportunity to bring it to life.

I spend a fair amount of time looking online for pictures/blogs about workspaces. I’m kind of fascinated by the areas other people use to make their art. There’s something so beguiling about dedicated spaces.  When I started this whole thing, I had a lot of ideas, a lot of misconceptions, and absolutely no idea at all what I was doing.  I looked online, and never really found what I wanted – a blog about the steps involved in making a dedicated space, from start to finish. Pictures about the things that matter to me – storage solutions, lighting, space management. Even the building process itself is mystifying to me.

So, I”ll demystify some of it, here.

We’re in the very early days – they start on Monday with the machines that will remove the current garden shed and start to dig a big hole for the foundation. That is not, however, the start. As with weaving, the process of setting up takes quite a while! We started this process in October – 4 months ago – and it has taken that long to muddle our way to this point. We ended up working with a terrific local company, Bentley Built Homes, and they have helped to shape all of my ideas into something concrete.

Over the next several months I’ll keep you filled in on what’s happening here with Berwick Weaving Co.’s new digs. Once it’s open, it’ll be so nice to have people drop in for a studio tour, or lessons (or even just a coffee, if you notify me first). I’m so excited about this – making a dedicated space that is quiet, peaceful, organized. Making a space that is uncluttered, airy, and light-filled.

This process has made me think about my process – what I want from my weaving practice, how I want to move forward, and why I’m doing it. The construction process will probably disrupt some of my work, but it’s also going to focus it, I think. This year, I’ve decided that I’m going to be sole instructor and student of my own impromptu weaving school – there are things I want to learn to do better, processes that I haven’t tried or that I couldn’t try because of other commitments, space constraints, a cluttered mind.

Pop back in for occasional updates. I’ll leave you with this tantalizing view of the plans. 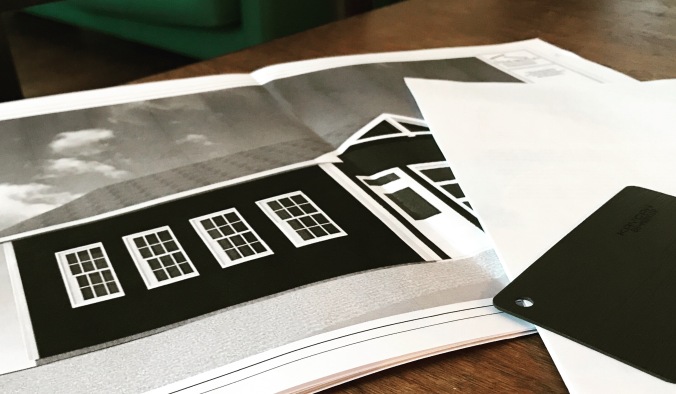