A few months ago we were in Ireland, and made a point to revisit a lovely old town with a mill of the same name: Avoca. About 4 years ago we’d first happened upon it, and it was maybe the first time I’d ever really seen a loom in action. Much of what they do now is automated, but they still have a few old looms on the factory floor. The weaver was a lovely man who told me he’d been working there for over 30 years and wasn’t tired of it yet.

Watching the weaver on that loom was, somehow, life-changing for me. On the spot I realized I wanted to do that. Not only wanted, but needed to try it. I don’t know why, and I’m not going to worry about it over much – I think that if you feel that sort of urge, you should go with it. 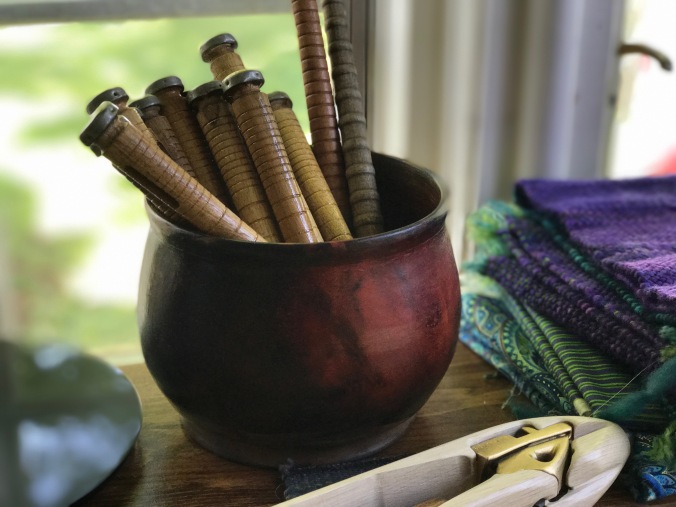 Later in that first trip, that weaver was still in the back of my head; the snick-snick of the shuttle, the clatter of the harnesses, the gorgeous textiles…. We then happened upon Swallow Studios in Annyalla, and lo! More weaving. This time, Liz Christy’s studio with all of her gorgeous colors and textures. It was such a pleasure to see her work (and to buy a shawl to take home), and to realize that it wasn’t only “factories” like Avoca that had looms.

4 years later, almost to the day, I’m sitting in my home weaving studio. The past four years have been a treasure. It has been, essentially, a dedicated self-directed journey into the art and mechanics of weaving. There isn’t much I don’t like about it, and I continue to fine-tune my practice and techniques. It’ll take me the rest of my days to learn all there is to know and that’s just fine with me. I’m putting in my ten thousand hours, and ten thousand more.

This month I treated myself to a flying shuttle beater.  A very interesting contraption that offers the opportunity to weave more quickly, over wider areas. It revolutionized handweaving back in the industrial revolution, and although I’ve only used it to make one blanket so far, it is having the same effect on my weaving.  Faster, and smoother, but still handweaving nonetheless. I’m keeping my other, sans-flying-beater, loom as well, at least for the moment.

Yesterday I’d finally cleared the decks enough to try out the flying shuttle, and as I stood there, pulling the cord and listening to the snick-snick of the shuttle and the clatter of the harnesses, I realized that I was doing exactly what I’d seen that weaver  doing 4 years ago in Avoca.

There’s something to be said for listening to that little voice that says “I want to do that”.  Go out and do whatever it is that is whispering to you. Weave, write, make toys…. whatever it is, make the time.